In the next installment of the Differential Diagnosis Series for MedBridge Education, we are going to take a look at the difficult and complex diagnosis of Athletic Pubalgia…

Athletic pubalgia is a catch-all term for soft-tissue pathology in the groin, lower abdominal, pubic, and medial thigh regions. This pathology can be secondary to tendinopathies, osteitis pubis, posterior inguinal wall insufficiency, and nerve entrapments in the inguinal region.3

It can involve the following anatomical structures:3,4,8

Athletic pubalgia is a common injury found in athletes and the general population alike.

Athletic pubalgia most commonly occurs in sports requiring cutting, pivoting or frequent acceleration/deceleration (ice hockey, football, rugby). Amongst field-based athletes (soccer, rugby, lacrosse, etc.), roughly 10% of injuries are due to groin pain,6 whereas these injuries account for approximately 2-5% of all sports medicine injuries.7 Chronic groin pain ranks as the fourth most common injury in the Rugby Federal Union.

In ice hockey, groin pain is an all too common occurrence as well. A retrospective case series over the course of six National Hockey League (NHL) seasons found a total of 617 groin/abdominal injuries, with a recurrence rate of 23.5%.1

As to the physical examination, the literature supports several findings:5

As with most hip pathologies, special testing for athletic pubalgia is not robust enough to significantly change a clinician’s clinical reasoning with regards to diagnosis.

However, a systematic review with meta-analysis conducted by Reiman and colleagues9 has discovered three tests (see table below) that allow to rule in the condition with confidence. As to screening and ruling out the pathology, these tests do not provide enough information due to their low sensitivity and high negative likelihood ratios.

Previous injury to the groin region is the most predictive factor in developing this disorder.

Modifiable risk factors include reduced gluteal strength (adductor and abductor), which makes sense given the proposed mechanism of injury. Higher levels of competition and less sport-specific training have also been associated with higher incidence of groin pain. 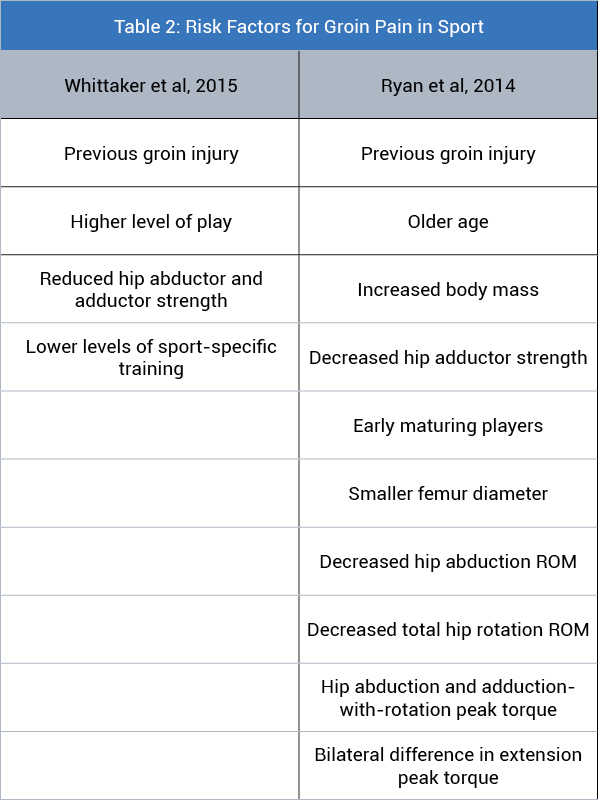 Although a diagnosis of athletic pubalgia is complicated, its presence does not prevent your patient from having any concomitant pathologies.

Econompoulos and colleagues performed a retrospective case series to determine the prevalence of femoroacetabular impingement in athletes undergoing surgical treatment for athletic pubalgia. They found radiographic evidence of FAI in at least one hip in 37 of 43 patients (86%).2

In a prospective case series by Weir et al., 94% of 34 athletes with long-standing adductor related pain had radiological findings consistent with femoroacetabular impingement.11

These findings speak to the need to fully investigate all logical differential diagnoses that may affect the patient’s plan of care or prognosis. Ruling in one condition with confidence, does not preclude that patient from having another condition that may contribute to their pain.

Athletic pubalgia should typically be considered a diagnosis of exclusion, as there are often concomitant diagnosable pathologies present. It is important to not only rule out FAI (as previously discussed), but also acetabular labral tears and other intra-articular disorders of the hip. The low back cannot be ignored either as it also has the ability to refer pain into this region. Once these other pathologies have been ruled out, knowing the epidemiology, risk factors, and specific special tests associated with AP can improve the accuracy of the clinical diagnosis.